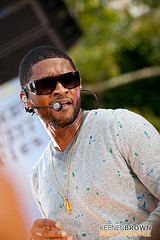 A 10 year old Canadian girl – nicknamed the “singing girl” during previous treatment at Ottawa’s Children’s Hospital of Eastern Ontario (CHEO) – broke out into song after brain surgery at the  Hospital for Sick Children, singing Usher’s “DJ Got Us Falling In Love Again”.

“She is just amazing,” exclaimed her father from Toronto, where the girl had undergone the eight-hour surgery the previous day.

Ariane Delorme was suffering from a brain tumor, commonly known as papillary tumor typically found at the pineal region of the brain – a disease so rare that it was named for the first time in 2007 by the World Health Organization. According to her doctors, Ariane is likely the youngest patient with this condition.

The girl initially began to easily feel lethargic and could not walk properly, which spurred her parents on to seek a medical diagnosis.

Since September 13, when the diagnosis was made, Ariane has had fluid drained from the malignant tumor and undergone three surgeries at CHEO. According to her mother, Veronique Chiasson, Ariane would have died if the initial surgery had not been immediately performed. A major part of the tumor was removed three days later and doctors have informed her family that the last surgery went “as good as planned.”

Weighing about 44 lbs, Ariane is recuperating well in hospital with her head bandaged, waiting for the next MRI to determine how much of the tumor still remains.

Any remaining tumorous tissue will be completely removed with six weeks of radiation treatment in Ottawa. Doctors have noted that the chance of the tumor returning after radiation is as low as 20%.

As of 2008, forty cases of papillary tumors have been reported according to a study performed by Tohoku University Hospital in Japan.