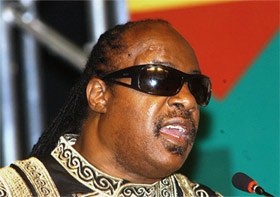 Pop legend Stevie Wonder recently told diplomats from over 200 nations to stop fighting over copyright issues and support actions that can help blind people around the world.

Wonder stated there is a lack of support and learning materials for the visually impaired all around the world due to various countries having laws that prevent books from being translated into audio formats.

Blind since birth, Wonder, a U.N. Messenger of Peace who has sold more than 100 million records since the 1960s, said “We have the greatest minds in the world right here in this room. Please work it out. Or I’ll have to write a song about what you didn’t do.”

The World Blind Union supports the music legend’s stand and stated that in developing countries, less than 1% of published works are available in formats like Braille or audio. The numbers do not improve much even in many richer nations where numbers reach a mere 5%.

World Intellectual Property Organization (WIPO) member states have tried to push for laws that can overcome cross-border copyright laws, but have been met with resistance over the years.

Although many feel that totally free rights of translation are necessary, others prefer that no loopholes for piracy are left unchecked.

Despite the soul music superstar believing that the first step to attaining this is to loosen copyright laws, he is also aware that the WIPO must figure out a way that allows easy import and export of copyright material for the blind.

There are more than 316 million visually impaired people in the world who continue to suffer from a lack of learning materials and work opportunities today.

Photo of Stevie Wonder via wikipedia