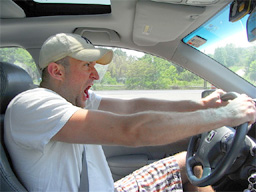 Interaction between drivers has taken a new step with the launch of Bump.com, a new social networking site that allows users to connect to other drivers just by using their license plates.

The website and smart phone app now lets drivers vent at drivers who cut them off or contact the attractive occupant of a car in the next lane.

This social networking site facilitates users with sending messages to those people based simply on their plate numbers.

Bump.com requires that all drivers register using their license plate numbers in order to freely interact with one another. As with all social networking sites, the more registered users there are the more powerful the application gets.

The official statement by Bump.com’s site is that the application was created more to cater to making friends and communication rather than directing insults.

The website summarizes the service’s appeal by asking potential members:

“Have you ever wished you could get a hold of the person driving next to you and tell them something was wrong with their car? Have you ever been at a stoplight and a really cute girl was in the car next to you? Now, you can do the unthinkable and and actually make a connection with her and hundreds of other drivers you pass on the road daily.”

You can register for the service by visiting bump.com.

The Slim TWO smart toilet seat offers a smart sensor, heated
Apple has revealed what many iPhone owners already suspected - it's slowing
Discovered by accident, new screen material can repair itself in 30 seconds
Get up to 4 hours of instant power, on the go, with
Quickly add a bracelet holder's account ID to a smartphone by passing
Go to Top