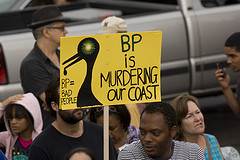 BP officials released a statement today saying that the efforts to cap the leaking oil well in the gulf are on target to be completed by mid-August.

These reports come just one day after the company was forced to remove a cap that was restricting the flow of the oil because of damage caused by an unmanned sub in the area.

The plan that has been laid out by BP is to drill two relief wells that can then be used to start pumping out the oil and ease the pressure on the main leak. This will give the workers a chance to cap off the well permanently and prevent any further leaks from occurring.

Once the relief wells are in place they will send down a load of heavy drilling mud that will restrict the flow of the oil. With the mud in place they will then fill the hole with cement that will seal off the well and stop all oil leaks. This plan, one that comes months after the original leak started, is not viewed by many with much hope.

Most are saying that BP has been making promises all along and none of them have come through. The response to the leak was slow and since that time the entire leak effort has been hampered by constant break downs and other occurrences.

The stock in BP has plummeted since the spill began. Stock prices were resting at $60 per share before the blast on the oil rig that started the leak. Less than a week later they were trading at $20 and have settled at $24 in recent trading sessions.

The company has announced that the effort has cost them nearly $3 billion dollars with no end in sight. They have started the process of collecting claims from fisherman and other industries in the area for the purpose of financial settlements.

Tropical storm Alex is currently building strength and is on track to hit the Gulf coast.