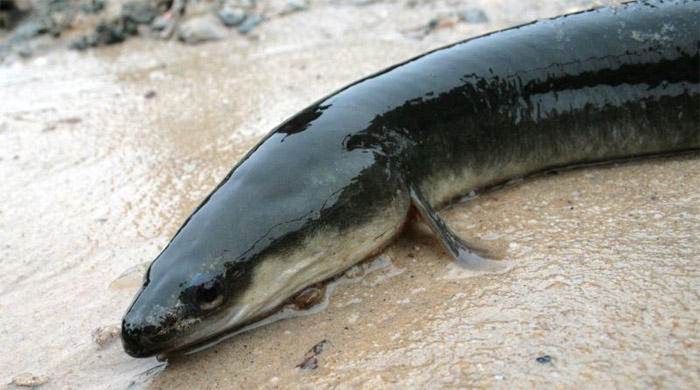 “American Eel should be federally listed as a Threatened species under the Species at Risk Act but indecision is hindering recovery of the species,” said Anne Bell, Director of Conservation and Education for Ontario Nature. “This situation is dire as some populations have declined by 99 per cent.”

In the early 1980s, one million juvenile eels returned to Lake Ontario via the Saunders eel ladder, but there has since been a massive decline.  The number of returning eels has decreased by 8000 per year since the species was assessed as Threatened in 2012, with less than 7000 returning in 2017. Federal leadership is required if we are to work together to advance American Eel recovery, the groups say.

“Though American Eel is listed as Endangered in Ontario, protecting the species there will be insufficient if barriers and fisheries downstream continue to kill American Eel and prevent upstream passage,” said Nicolas Lapointe, CWF senior conservation biologist, freshwater ecology and one of the lead authors of an open letter to the Hon. Dominic Leblanc, Minister of Fisheries and Oceans Canada (DFO).

The government of Quebec has not listed American Eel under the provincial Act Respecting Threatened or Vulnerable Species, and has no provincial recovery strategy for American Eel.  As a result, there is no protection in the Quebec portion of the shared waters of the Ottawa River, despite the species’ Endangered status in Ontario.  Even though extremely low numbers of eels are migrating out from Ontario waters, they continue to be commercially fished in Quebec in the lower St. Lawrence River.

Where commercial harvest has been demonstrated to be sustainable and to have no negative impact on populations migrating further into Quebec and Ontario, the groups support the exemption of American Eel fisheries from restrictions. This approach has been effectively applied to permit recreational catch-and-release and harvest of Westslope Cutthroat Trout Alberta populations, Lapointe says.

To allow for time to prepare a recovery strategy, the Governor in Council could also allow permitted or licenced activities to continue for up to one year.  During this time, the recovery strategy could be formally approved with clearly defined exemptions for acceptable activities, such as harvest where fisheries remain sustainable.  Appropriate regulations for the sale, purchase, and possession of the species could also be developed during this period.

“We appreciate that some interim actions are in place to reduce mortality of American Eel, however, DFO must begin applying ministerial discretion under the Fisheries Act to require hydropower facilities to provide upstream passage for American Eel, and to avoid, mitigate, and offset turbine mortalities,” Lapointe says.

Conservation groups are calling on DFO to recommend listing American Eel under the Species at Risk Act as soon as possible. To ensure that recovery actions can be undertaken during the next migration season, the groups request that DFO take the following actions by May 18:

The American eel is a bottom-dwelling catadromous fish that begins its life cycle in the Sargasso Sea near Bermuda. The fish migrate to the coasts of Newfoundland and Labrador as well as the Gulf of St. Lawrence with females continuing on to fresh waters including the St. Lawrence River and Ottawa River. These females need to return to the sea to spawn.