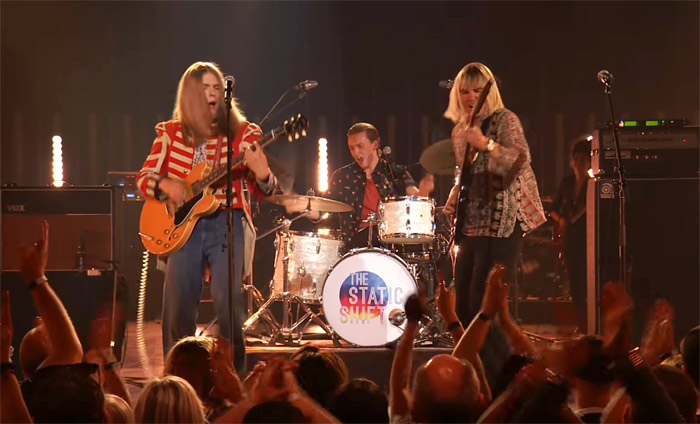 Innovative music show THE LAUNCH is proving a ratings and sales success in its first season with a trifecta of hit songs across three consecutive weeks.

Calgary-based trio The Static Shift brought their alternative/blues/psychedelic rock stylings to THE LAUNCH, premiering “Wide Awake” to rabid fans and taking the No. 1 spot on the iTunes Rock and Top 5-and-rising All-Genre charts in Canada.

The Nathan Barlowe and Bonnie Baker-penned track was released to radio stations across the country and is currently available to buy and stream everywhere, including iHeartRadio, Apple Music, iTunes, Spotify, and Google Play.

Listen to “Wide Awake” here or watch their performance on THE LAUNCH below:

“The Static Shift completely blew my mind,” said Scott Borchetta. “I am always on the hunt for uniquely talented artists and musicians that have a special chemistry and that’s exactly what they have. This is a band that has a world stage and they’re uniquely positioned at the dawn of a new Rock Revolution.”

The momentum continues as previous winners both hit No. 1 on the iTunes All-Genres Top Songs Chart following the broadcast in which the aspiring artists were featured and remain in the upper echelon at iTunes in Canada.

Elijah Woods x Jamie Fine’s “Ain’t Easy” is still holding No. 4 All-Genre at iTunes and No. 2 on the Spotify Viral Top 50 chart while their video trended on the YouTube Top 20 videos in Canada after the show. Logan Staats “The Lucky Ones” is Top 40 on iTunes All-Genres and spent all last week at No. 2 on the Viral Top 50.

Viewer engagement for THE LAUNCH continues to be strong as the hit show was one of Twitter’s Top Trending Topics that evening proving that the Big Machine and Bell Media format has built-in multi-platform success.

Tune in next Wednesday on CTV at 10P ET as Grammy® Award-winning, multi-platinum solo artist and recording star Fergie and the music mastermind behind massive inescapable hits like the quintuple-platinum “Wrecking Ball” Stephan Moccio hold court as guest judges on THE LAUNCH.

THE LAUNCH was put into development in January 2016. The series was co-developed by and is produced by Bell Media in association with Scott Borchetta of Big Machine Label Group, Paul Franklin of Eureka (MASTERCHEF, THE BIGGEST LOSER), in partnership with John Brunton and Lindsay Cox of Insight Productions (THE AMAZING RACE CANADA, CANADIAN IDOL, THE JUNO AWARDS).

THE LAUNCH is truly a new and unique format documenting a behind-the-scenes and in-studio look at what it takes to bring a new, original song to life in each hour-long episode, and it’s all shot in 48 hours. Each week the artists audition for the opportunity to record and perform the new original song written by a world-famous songwriter/producer and mentored by a panel of internationally renowned music industry legends.

Immediately following the auditions, the mentors choose two artists to enter the recording studio and record the original song and prepare to perform it in front of a live audience. The mentors then choose which artist and recording will immediately be released across the country following the broadcast of the episode each week.