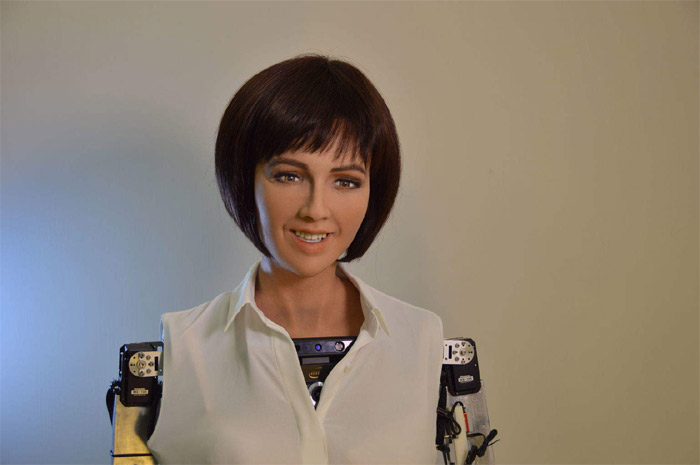 A silicone robot that mimics over 60 human-like gestures and expressions with cameras for eyes has just received citizenship in Saudi Arabia.

Last Wednesday, during an international technology event held in Riyadh (below), Sophia the robot announced she had received official Saudi citizenship.

The announcement was made to the conference audience and her segment’s host, American journalist Andrew Ross Sorkin.

“I want to live and work with humans. So I need to express emotions to understand humans and build trust with people.” said Sophia, who added she was “honored and proud for this unique distinction.”

However, the news was not universally celebrated in the country.

As Sophia’s citizenship status began to circulate on social networks, many Saudi men and women wondered how it was possible for the new citizen of the country to have more rights than actual humans.

One example used was that Sophia addressed the audience without wearing a headscarf and an abaya – clothing that covers a woman down to her ankles that is is required by Islamic law in Saudi Arabia. She was also not accompanied by an approved male, as women must be when leaving home – typically a member of her family.

Sophia was created by Hong Kong’s Hanson Robotics. Its founder, Dr. David Hanson, worked at Disney as one of its Imagineers and now his goal is to create robots that “look and act amazingly human.”

Available for free, the SitterAdvantage babysitter app offers emergency help incl. important
Scientists in Argentina have announced the discovery of Ingentia prima, the first
A collaboration between Analytical Graphics Inc. and Thoth Technology advances state-of-the-art for
As advancements in connectivity and miniaturization of electronics are made, smart sensors
Secure harness mount location provides an unobstructed 360° view of an event
Go to Top